Summary of Winter Is Coming 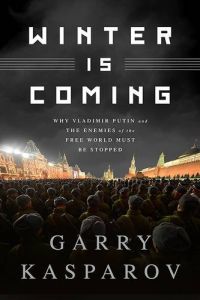 In this passionate critique of Vladimir Putin, Russian exile dissident and chess champion Garry Kasparov contends that Russia’s decline into fascism is nearly complete, and the Western world is still ignoring it. Kasparov offers detailed arguments that Putin rigs elections and plunders assets, and discusses the way he wages war and treats other nations. For all his brainpower, Kasparov sometimes seems naïve when the story gets personal. He’s shocked that Russian cops roughed him up when he bellowed at them during his arrest at an anti-Putin protest. Kasparov makes no claims to objectivity. He opposed Putin while living in Russia and fled the country in fear of his life. His crisply written outcry offers a hard look at the ugly side of Russia under Putin. getAbstract recommends Kasporov’s polemic to investors, policy makers, students, professors, NGO leaders and travelers seeking insight into the workings of Russia today.

The world’s top-ranked chess player for 20 years, Garry Kasparov is also an activist for democracy and lives in exile in New York.

The Death of Democracy

Russian democracy is all but dead. Vladimir Putin killed it with his totalitarian tendencies, and Western leaders have been unwilling to intervene. For a few years after the 1991 fall of Soviet communism, Russia was a messy but promising experiment in democracy. In 2000, Putin ascended to the presidency. From that perch, the former KGB agent undermined fair elections, corrupted the independent judiciary, co-opted the independent media, stole the assets of oligarchs who defied him, and killed hundreds of people in hostage situations in 2002 and 2004.

In 2008, Putin gave up the presidency after reaching his constitutional limit of two four-year terms. He took the role of prime minister and stripped any semblance of democracy from Russian society. In 2013, forces that Putin controlled brutalized peaceful protesters, and judges sentenced some of them to long prison terms. In 2014, Putin invaded Ukraine and snatched Crimea. Incredibly, these affronts met with barely a whimper from leaders of Western democracies.

Just as you don’t lose a chess match in one ill-fated move, Russian democracy didn’t die in a single blow. It slowly bled out after...