Summary of Without Democracy, China Will Rise No Farther 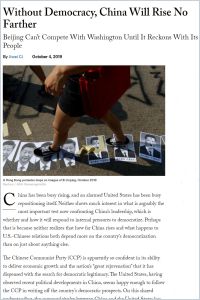 A consensus seems to be forming among students of international relations that China is entrenching authoritarianism. They point to President Xi Jinping’s sweeping expansion of internal surveillance and systematic crackdown on freedom of speech and political dissent. Yet political philosopher Jiwei Ci believes that the forces of history won’t sustain Xi’s momentum. Taking his cue from Alexis de Tocqueville, he provocatively argues that the days of an undemocratic China are numbered. Although not everyone will find Ci’s argument convincing, his essay provides a welcome counterpoint to the prevailing wisdom on China.

Jiwei Ci is Professor of Philosophy at the University of Hong Kong and the author of the forthcoming Democracy in China: The Coming Crisis.

Alexis de Tocqueville argued that political systems will eventually come to match the social profile of the societies they govern.

In Democracy in America, Alexis de Tocqueville argued that when a society evolves from a hierarchical social order to a more egalitarian one, the political system will eventually mirror these new circumstances. He argued that the discrepancy between a “democratic society” and an undemocratic system of governance is not sustainable in the long term, with the polity losing legitimacy in the eyes of the governed.

Ultimately, he believed, an undemocratic regime can’t endure in power over the long term by sheer use of force and propaganda.

Chinese society is becoming more egalitarian, which will increase pressure on the government to democratize.

Over the past four...