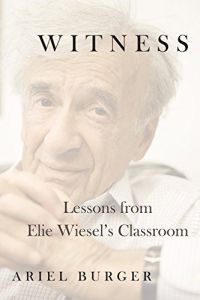 Ariel Burger provides a fascinating look into the life and classroom of a monumental 20th-century thinker. Nobelist Elie Wiesel (1928–2016) was an adviser to world leaders and an activist who drew from his experiences surviving the concentration camps. His history is a unique backdrop for Burger’s analysis of politics, current events and the future. As Wiesel’s student and protégé, he provides a detailed guide to his mentor’s inspirational approach to life, thought, religion and unity. Wiesel said, “Listening to a witness makes you a witness.” With Burger’s insights, you become a witness, too. Readers seeking a moral viewpoint will find much to consider in this remarkable collection.

Author, rabbi, artist and teacher Ariel Burger was a lifelong student of Elie Wiesel, whose teachings profoundly influenced him.

Elie Wiesel (1928–2016), who received the Nobel Peace Prize in 1986, remains one of the foremost chroniclers of the Holocaust and the concentration camp experience. Students worldwide read his memoir, Night, when they study World War II. Drawing from his experiences during the Holocaust, Wiesel worked throughout his adult life to aid oppressed people worldwide. He was a famed public speaking, best-selling author and powerful advocate, but the role he embraced most passionately was being a teacher.

Wiesel saw teaching as his main role and writing as an extension of teaching; he saw education as a way to influence history.

Like Wiesel, author Ariel Burger grew up studying ancient Jewish texts and found comfort in learning. He loved to draw and to read children’s fairy tales and folklore stories, which he found began to blur with parables in the Bible. His broad reading taught Burger how to pursue his goals, conquer...

Faith
9
The Battle to Do Good
8
Quirky
9
High on God
8
Girl, Wash Your Face
8
Inventing the Individual
8