Summary of You Can't Lie to Me 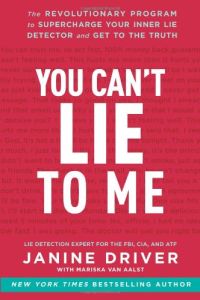 Lying has become so commonplace that people expect it when they read a pumped-up résumé, or watch an athlete evade prosecution, a CEO deny accountability or a celebrity proclaim innocence. Not knowing whom or what to believe may impair your instinctive lie-detection ability, a calibration that lie-detection expert Janine Driver calls your “BS Barometer.” This book is the best-selling author’s attempt to help you repair the damage and learn to tell if someone is lying to you. Based on her extensive experience at the US Department of Justice, Driver shares law enforcement and body language techniques in a five-step “deception detecting” program. Her advice is solid, if sometimes familiar; and, unfortunately, the exercises after each chapter provide more busy work than useful tools. The book’s real flaw, however, is the author’s relentless self-promotion, which undermines her credibility, even when she’s truthful. All that aside, getAbstract finds this a helpful guide for those seeking better information, tougher skin and second sight.

Janine Driver, who also wrote The New York Times’ bestseller, You Say More Than You Think, and is an expert on body language and lie detection.

Most people’s “BS Barometer” – their natural ability to spot lies – grows weaker under modern culture’s onslaught of untruth. Most people assume that some or most of what they hear or read is part fabrication. Just since 2010, con artists, deceivers and dissemblers, including financial scam artist Bernie Madoff and sexting politico Anthony Weiner, have taken turns in the headlines.

The ability to spot liars is essential to your self-confidence and peace of mind. Recognizing when you’re being lied to helps you defend yourself against manipulators, differentiate between truth and fiction, and form “authentic relationships” that are based on mutual trust.

People are slow to recognize lies because they may be in denial or gullible or possess inadequate lie-detecting skills. Several myths about lying throw people off track. The widely held notion that liars have “shifty” eyes or are reluctant to make eye contact is simply not accurate. Some people naturally move their eyes as they speak. The natural amount of eye contact varies from person to person depending on people’s natural inclinations, gender and culture.

Get People to Do What You Want
9
The Post-Truth Business
7
The 7 Secrets to Selling More by Selling Less
8
You Were Born to Speak
8
Wherever You Go, There You Are
7
Game Changers
9