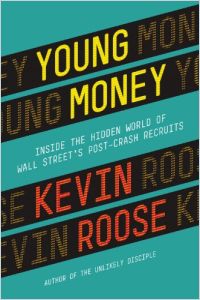 New York magazine business writer Kevin Roose chronicles the lives of eight young Wall Street workers from 2010 to 2013. He changed their names to encourage them to share their honest thoughts and feelings about working for major investment banks. Their true stories feature common threads, notably the long working hours, handsome pay and mixed status of Wall Street analysts. The author also tells a bigger story about Wall Street. Major investment banks, which the public widely views as the primary movers behind the 2008 financial crisis, must change their approach to recruiting top college graduates. For example, the practice of hiring graduates as analysts for a grueling two-year tryout will become less common. Despite – or due to – the main characters’ anonymity, getAbstract recommends these portraits as a revealing look at post-crisis Wall Street.

Kevin Roose is a business and technology writer for New York magazine. He covered Wall Street for the business section of The New York Times and wrote The Unlikely Disciple.

Consider the careers and personal lives of eight twentysomething employees who worked for big New York investment banks from 2010 to 2013. Most were first-year analysts in major banks’ investment banking divisions and commonly put in 100 hours a week. These young people had to navigate the public backlash against Wall Street firms for their role in the 2008 financial crisis. The public resentment cut the number of Wall Street jobs as well as their social status.

Arjun Khan attained a goal he had pursued for years – a job as a mergers and acquisitions analyst at Citigroup. Khan had attended Fordham University, which is not a Wall Street recruiting “target school.” He was “an Indian kid from Queens with no family connections,” facing “the worst Wall Street hiring climate in a generation.”

Khan later sought a fresh opportunity among private equity firms that compete with investment banks for talent. These firms traditionally recruited second-year bank analysts; now, they increasingly recruit first-year analysts. Khan did not move easily into a private equity job, though his peers who switched from banking...

Welcome to the YOLO Economy
9

What Is QAnon, the Viral Pro-Trump Conspiracy Theory?
8