Review of 12 Rules for Life 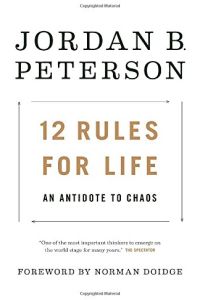 Clinical psychologist and university professor Jordan B. Peterson draws from religion, philosophy, neuroscience and anthropology to formulate “12 rules” for living a meaningful life. He believes that if people don’t uphold a hierarchy of values, they will fall into paralysis and, consequently, despair. Jordan is well-read, brilliant and unafraid to address complex issues in a sharp, readable voice. His rules seem familiar because many derive from Christian ethics – which, Peterson says, inform overall Western culture – most notably the duty to accept suffering and to alleviate it. Jordan sees culture as part of biological evolution and therefore inescapable. He also has faith. This may undermine his thinking for certain readers and make it seem like gospel for others. Readers may be daunted by his references to God and philosophy, not to mention his controversial remarks about men and women – such as in Rule 11 – and his thoughts on using force to discipline children. Peterson rarely lapses into academic jargon and never lacks sincerity. Throughout, his message is clear: You must accept responsibility for your own life. Peterson bravely and confidently attempts a blueprint to help you do just that.

Clinical psychologist and University of Toronto psychology professor Jordan B. Peterson, PhD, also wrote Maps of Meaning: The Architecture of Belief. His lectures on myth and personality are popular on YouTube.

To engage in the world and make it a better place for yourself and others, Jordan Peterson insists you must put your own house in order, determine your aims in life, confront your fears and live in truth. Those are lofty goals and humankind has fought to achieve them since the dawn of consciousness. Peterson has neither the first nor last words on these topics, but he has carefully read most authors who preceded him on this quest and reflects their wisdom. To follow that path, he urges you to abide by these 12 rules:

“Rule 1: Stand Up Straight with Your Shoulders Back”

Peterson asserts that lobsters have simple brain chemistry compared with humans, but the two species show remarkable similarities. In both, serotonin levels regulate confidence, as needed in the battle for dominance. Adaptability to adversity determines evolutionary success for both species and, according to scientometrics researcher Derek J. de Solla Price’s law of unequal distribution, succeeding in this quest guarantees further success. The principle applies to those of lowly and of high status: If things are bad, they’re probably going to get a lot worse. This is known as the “ever-present dominance hierarchy.”