Summary of Birth of a Salesman 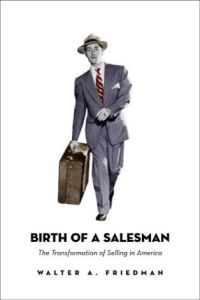 The salesman is “out there in the blue, riding on a smile and a shoeshine,” explained Willy Loman in Arthur Miller’s classic drama Death of a Salesman. From its earliest days, America has been a nation of exuberant sales reps, optimists like Loman, who explains, “A salesman is got to dream, boy. It comes with the territory.” In the novel, A Bad Man, author Stanley Elkin deconstructs the word salesman: “sales is man.” This resonates in the U.S., where the ability to sell represents the acme of commercial achievement. America’s tradition of evangelical salesmanship has indelibly colored the country’s soul and helped create its rosy self-perception. getAbstract suggests that if you really want to understand America’s commercial nature, you should read this enlightening book about the history of sales in the U.S. (For much of its length, the book covers the history of salesmen; women did not really enter the field until the second half of the 20th century.) Backed with comprehensive research, Walter A. Friedman paints a well-crafted portrait of a remarkable field carved out by these iconic, irascible, irrepressible individuals, one deal at a time.

Walter A. Friedman, a Business History Review co-editor and a Harvard Business School Research Fellow, specializes in the business, economics and the history of labor.

Salesmanship and its close cousin, sales management, are American phenomena. The concept of selling has always meant far more in the U.S. than elsewhere. America’s exuberant (some would say, crass) commercial sales culture defines the nation’s personality to much of the world.

Before today’s professional salespeople existed, peddlers operated during the 18th and 19th centuries. Canvassers stepped in after the Civil War. Early Americans had mixed feelings about these disreputable “hawkers and walkers.” “Get out of my house in a minute, or I will horsewhip you,” one farmer yelled at a canvasser. Merchants also disliked peddlers who, in effect, stole their customers. Yet peddlers and canvassers performed an indispensable service for early Americans, many of whom lived in remote locations on farms and in small villages.

These salesmen brought books, imports, notions and manufactured goods to these rural Americans, along with news about what was going on elsewhere. Peddlers included independent operators who bought goods and sold them at slightly higher prices, representatives of storekeepers or artisan-entrepreneurs, and members of “peddling...