Summary of Cracking the Leadership Code 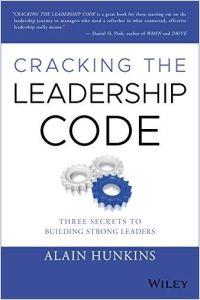 Corporate coach Alain Hunkins draws on three critical elements – “connection, communication and collaboration” – to help you become a leader. Connection, which is based on trust, comes first. People will feel that you care if you connect personally. Communication helps make other people feel comfortable collaborating with you. Hunkins discusses the vital role of empathy in motivating employees, the factors that impede leaders from practicing empathy and how to become a more effective communicator. His entertaining, instructive book will help anyone interested in becoming a leader or in becoming a better one.

Alain Hunkins is a coach, facilitator and keynote speaker with 25 years of experience serving leaders in all industries, including 42 Fortune 100 companies.

Draw on “connection, communication and collaboration” to establish your position as a leader.

In 1999, Alan Hunkins sought to become the executive director of a nonprofit leadership development group in New York City. He had worked hard for the group and had no doubt that the organization’s members would elect him as the executive director at their annual meeting. Instead, 85% of the members voted for a successful businessman named Gary who had little knowledge of or experience with the organization.

Gary later explained to Hunkins why he won. He’d gotten to know the people at the organization by taking them out to lunch or coffee, probing their views on the nonprofit’s work and asking them what direction they thought it should take. He had explained to them why he wanted to become executive director. Gary asked them to let him join their team, so he could boost the organization’s prospects and to vote for him as executive director, so they could together work for its future. Hunkins, on the other hand, had assumed that the board members would know about him and his hard ...