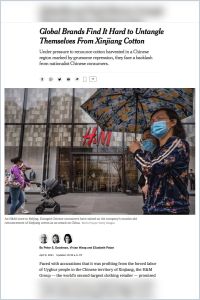 In the globalized world, clothing brands expect criticism that they exploit underpaid workers in undeveloped countries. Now, they face a unique – and especially grave – situation in Xinjiang, China, as Peter S. Goodman, Vivian Wang and Elizabeth Paton report in The New York Times. Xinjiang is the source of 85% of China’s cotton and ground zero for China’s genocidal assault against the Uyghurs. The US government seeks to prevent sale of  Xinjiang cotton products, but the Chinese government has threatened firms that they must ignore its persecution of the Uyghurs or relinquish China’s massive, lucrative market.

Peter S. Goodman is a London-based global economic correspondent for The New York Times, for which Vivian Wang is a China correspondent and Elizabeth Paton is a reporter.

Opponents of China’s persecution of the Uyghurs in Xinjiang are calling for a ban on cotton from the region.

In 2020, H&M, the world’s second-largest clothing retailer, faced accusations of profiting from the Chinese government’s massive repression of the Uyghur people in Xinjiang province. China has driven Uyghurs into mass slave labor camps in a region with significant cotton crops. In response, H&M announced it would cease purchasing cotton from Xinjiang – as did Nike, Burberry and clothing giant PVH.

Protest against the use of Xinjiang cotton by global clothing brands is nothing new. Since globalization’s advent, various international brands have faced consumer objections to their reliance on underpaid, exploited workers in underdeveloped countries like Myanmar and Bangladesh. Corporate responses have followed a standardized...

The Panopticon Is Already Here
9
Forget TikTok. China’s Powerhouse App Is WeChat, and Its Power Is Sweeping.
8
The Modern Supply Chain Is Snapping
7
Get Ready for the Chinese Internet’s Next Chapter
7
Why America Is Afraid of TikTok
8
5 Boring Ways to Become More Creative
9