Summary of High on God 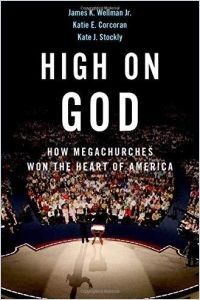 Prolific religion author and professor James Wellman Jr., and academics Katie Corcoran and Kate Stockly, all from Washington University, examined 12 American megachurches and interviewed church members. They found that even though a few charismatic church leaders have made negative headlines, most megachurches provide a warm, supportive environment. The authors report that the churches’ theatrical shows full of sound, light and energy generate an anchoring emotional impact. They explore both theology and sociology to paint an intriguing portrait which may surprise skeptics.

James K. Wellman Jr. chairs the Comparative Religion Program in the Jackson School of International Studies at the University of Washington where Katie Corcoran is an assistant professor of sociology and Kate J. Stockly is a candidate for a PhD in religion. Wellman also wrote Evangelical vs. Liberal, Rob Bell and a New American Christianity and Belief and Bloodshed, among other titles.

Megachurches have surged in popularity because they fulfill human needs.

In the midst of a religious experience, people generate “emotional energy” which they share with other attendees at an exhilarating service. That provides a “drug-like” experience that allows people to feel unified in a community and accepted as an individual at the same time.

Author James Wellman Jr., a professor of religion, attended all five services at a megachurch one Sunday while researching the megachurch phenomenon. Approximately 12,000 people attended the services. While the majority were “youthful,” the attendees were surprisingly racially and ethnically diverse. The church, a converted warehouse, had a professional sound and light system with huge mounted screens. ...