Summary of How to Have a Difficult Conversation 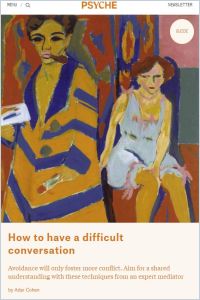 Conflict is normal in the workplace as well as at home, yet most people shy away from talking through their issues. But lingering conflict can fester and lead to more problems down the road. Professional mediator Adar Cohen encourages you to address conflicts by uncovering the “gem statement” that can change the tone of the entire conversation. His technique might transform your next unpleasant conversations into a productive and mutually beneficial discussion.

Adar Cohen is a mediator with a PhD in conflict resolution from Trinity College Dublin. He has lectured at Harvard University, the University of Chicago and Sherubtse College, Bhutan.

People commonly tend to avoid conflict, which can lead to further disagreements. Yet dealing with and handling conflict well helps strengthen relationships and facilitates personal growth. Tough conversations have three possible outcomes: a solution, a plan or an understanding. Don’t aim too high: Initially, work toward understanding.

Successful conflicts produce gem statements. These are honest, positive and meaningful comments that promote compromise, problem-solving and goodwill. In one argument about their elderly father’s medical care, for example, siblings arrived at the gem agreement that they all wanted what’s best for their father, even though they had different...

Give Compassionate Feedback While Still Being Constructive
7

An Adult’s Guide to Social Skills, for Those Who Were Never Taught
5
Why Managers Fear a Remote-Work Future
9

When It Comes to Culture, Does Your Company Walk the Talk?
8
The Seven Conflict Styles of People You Argue with at Work
7
How Successful Women Manage their Networks
9