Summary of Our Endangered Values 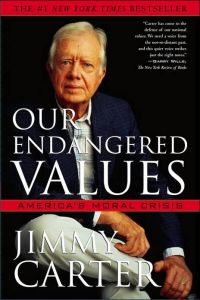 Nobel Prize winner and former US president Jimmy Carter asserts that Christian fundamentalists have taken control of the American government. Though he is a devout Christian, Carter outlines charges against fundamentalists and neoconservatives that reiterate many oft-aired criticisms of the current administration. He also decries fundamentalist control of the Southern Baptist denomination, which may be of less interest to business readers. Yet one need not agree with Carter to be drawn by his political philosophy and sincerity, nor disagree to be bruised by his self-righteous tone. This is more sermon than essay, for it has a pronounced religious focus, but getAbstract finds that it provides a heartfelt portrait of the value judgments of a historic figure who never hesitated to provoke debate. Readers seeking a liberal focus on issues about which conservatives and liberals disagree will find this to be a passionate touchstone, as will those alarmed by what they perceive as manifestations of fundamentalism in US public policy.

Jimmy Carter was the United States’ 39th president and is a recipient of the Nobel Peace Prize. His previous books include Leading a Worthy Life and An Hour Before Daylight.

The lines between the major US political parties have grown sharper and more difficult to bridge. When President Jimmy Carter was in office, Congress split over issues; now its divisions follow party lines. Republicans overwhelmingly prefer military action to diplomacy, while Democrats overwhelmingly prefer diplomacy. Republicans also are likelier to think that strong environmental legislation has an excessive economic cost.

Yet these differences are secondary as a political force, overshadowed by the intensity with which a small group of Christian fundamentalist activists promotes such extreme causes as outlawing all abortions or total freedom to own guns. Such activists have seized control of the government. Thus, although the US’s basic beliefs have not changed, its policies have become more divisive.

President Carter was raised as a Southern Baptist. On many issues, his denomination agrees with other branches of Christianity, notwithstanding some doctrines on baptism and the authority of scripture. Baptist ecclesial government once stressed local church autonomy. At that time, the Southern ...