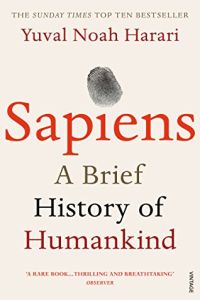 Yuval Noah Harari’s 400-page history of mankind is a timely meditation on the nature of Homo sapiens’ fickle path. Harari concludes that humankind prevailed by happenstance, a capacity for language and socialization, curiosity, mercantile fervor and technological prowess. He is uneasy about humanity as the intelligent designer of a new “superhuman” – a cyborgian, a machine whose inorganic longings may not include happiness. This roiling, off-the-beaten path tour de force will intrigue readers themselves equipped with curiosity, as well as patience and open minds.

Between 70,000 and 30,000 years ago, Homo sapiens invented boats and sewing needles, expressed artistic talent, and saw the benefits of business relationships.

Landmarks punctuate human history, including what Yuval Noah Harari regards as major transitions: the “Cognitive Revolution” beginning 70,000 years ago, the “Agricultural Revolution” of 12,000 years ago and the “Scientific Revolution” of 500 years ago. A fourth revolution, Harari posits, is now unfolding and may mark the end of Homo sapiens and the beginnings of new creatures altogether.

The human continuum began with a handful of six similar species. They gradually refined their abilities, followed their curiosity and won out against each other, largely by happenstance. The leading candidate, Homo sapiens, had a large brain that needed a large bone box to protect it and a sound skeletal structure to carry it on two legs. Harari cites other crucial evolutionary advantages: fine hands with an intricate weave of muscle and nerve, the ability to gossip, and the desire to socialize and raise offspring.

The Curious Advantage
9
Face to Face
8
Blaze Your Own Trail
7
Advice Not Given
7
55, Underemployed, and Faking Normal
9
A Beginner’s Guide to the End
9