Summary of Shut Up and Sit Down 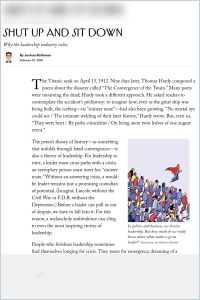 Confronting a crisis tests the character of leaders by making them grapple with darkness and despair. Think of Abraham Lincoln facing the US Civil War or Franklin D. Roosevelt confronting the Depression. Yet, as Joshua Rothman reports in his New Yorker review of Leadership: Essential Writings by Our Greatest Thinkers, author Elizabeth Samet finds that 21st-century crises are often so intricate and interconnected no leader could solve them. Even so, the public sees today’s problems as a leadership crisis. Amid current uncertainties, Rothman reports finding welcome perspective in Samet’s informative anthology.

Joshua Rothman, who has been with The New Yorker since 2012, is the ideas editor of newyorker.com.

An authentic leader pulls people out of crises.

People want great leaders to confront and ultimately resolve crises. Americans consider Abraham Lincoln one of the United States’ greatest leaders, in part, because he confronted the nation’s most daunting crisis – the Civil War.

The idea that leadership and crisis are internally connected can become such an obsession that people pine for a defining crisis. Indeed, in his 2016 campaign, candidate Donald Trump ran ads that depicted America in crisis and portrayed him as the powerful, charismatic leader it needed.

Despite the world’s complexities, people often attribute problems to a leadership crisis.

Leadership alone can’t solve many of the problems of today’s intricate, globalized world. Nonetheless, people often regard today’s various crises as problems of faulty leadership. Indeed, some people immerse themselves in the constant news cycle, ...

Are Things Getting Better or Worse?
8

Failing Up
9
The New Leadership Playbook for the Digital Age
10
Nurses: A Voice to Lead: A Vision for Future Healthcare
9
The Big Reset: Human-Centered Leadership
9
Being the Agile Boss
9
A Noble Purpose Alone Won’t Transform Your Company
9