Summary of The Bubble Economy 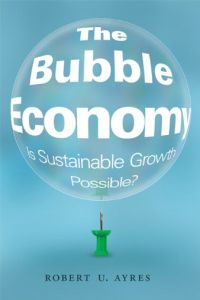 The ways that energy and environmentalism should tie into economics pose a timely and central question. Economist and physicist Robert U. Ayres expertly delves into the popular commonsense proposition that the investment and economic activity required to achieve a more sustainable energy sector could also provide the boost that the wider economy needs. He speculates on ways to lure cash-hoarding corporations to invest in green energy and to harness the financial system into funding new instruments that would spread risk and liquidity among fledgling green energy ventures. His thorough, conversational and jargon-free delivery makes this a good introductory book for the lay reader, particularly in its recounting of economic history. The sections on energy are among the book’s high points and would appeal to anyone interested in a sustainable economy. getAbstract recommends this dense but agreeable treatise to the general-interest reader and to those interested in green energy.

Physicist and economist Robert U. Ayres is professor emeritus of economics and political science at INSEAD. He is the co-author of The Economic Growth Engine: How Energy and Work Drive Prosperity.

Understanding Energy’s Role in the Economy

The tenets of mainstream economics lead you to believe that every sector of the economy is as important as the share of GDP it represents. Historically, the energy industry’s share of the economies in “most OECD countries has been somewhere in the neighborhood of 4%.” Economic theory implies that such a small sector does not matter so much and, therefore, is not a major factor in recessions or economic growth.

In fact, examining the elasticity of demand behind this 4% number will turn that perception around. The fact that the energy sector has, in the postwar decades, been only around 4% of GDP in the average OECD nation in the West is a sign of how much energy has facilitated growth and helped wealth to accumulate; it is not at all a sign that energy isn’t important.

Neoclassical theory also “assumes that economic growth is driven mostly by exogenous forces,” and it “regards the demand for energy (and other resources) as a consequence, not a cause, of economic growth.” That is, many economists see energy as just another item that consumers spend their growing incomes on, instead of appreciating the unique role that ...