Summary of The Global Risks Report 2018 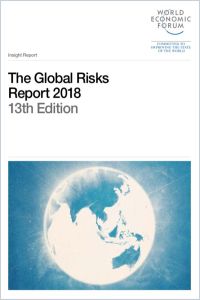 The World Economic Forum’s (WEF) yearly survey of the risks menacing the globe isn’t for the faint of heart. The 2018 report, released in advance of the group’s annual conference in Davos, Switzerland, includes a laundry list of frightening scenarios. Global warming accelerates as carbon dioxide emissions rise. Air pollution chokes most cities. Microplastic fibers contaminate both your drinking water and your shrimp cocktail. Stock prices may be unrealistically optimistic, bonds pay negative yields and the big banks hold more assets than ever. The US Federal Reserve and other central banks have slashed interest rates so low that they won’t be able to respond effectively to another economic crisis. Cyberattacks are rampant, a new strain of nationalism is disrupting geopolitics and some areas have 30% youth unemployment. The WEF study is mercifully succinct and a smooth read. President Donald Trump traveled to Davos to speak at the 2018 event, even though this report lists him as a potential new source of risk.

The 2018 edition of the World Economic Forum’s annual survey of the risks threatening the planet and its people finds hazards in many realms: the environment, cyberattacks, the markets and central banks, technology, nationalism, public health threats, youth unemployment, the spread of false information, North Korean leader Kim Jong Un and even President Donald Trump.

Addressing complex systems’ problems is daunting. Increasingly intricate inputs drive complicated ecosystems, economies and financial markets. When a risk ripples these labyrinthine systems, a full-scale meltdown may be imminent. Even if governments avert disasters in these areas, negative side effects can erupt. The financial collapse of 2008 didn’t lead to a global depression, but it yielded various “disruptions” that policy makers still may not fully comprehend. As change leaps far ahead of government and regulatory agencies’ ability to respond, society might have difficulty adapting.

The Impostors
8
The China-U.S Trade War and Future Economic Relations
8
Geopolitical Alpha
8
The Global Risks Report 2019
8
The Age of Walls
8
The 2018 Report of the Lancet Countdown on Health and Climate Change
8