Summary of The Mystery of Capital 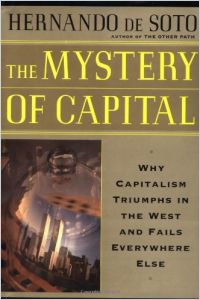 Hernando de Soto’s ideas cannot and should not be ignored. This book will open many eyes to the nature of capital. The author suggests a radically simple yet enormously challenging way of bringing the world’s impoverished billions onto the track of capitalism and development: give them legal property rights to what they “own.” The author’s intriguing case is that a lack of property rights - not a lack of entrepreneurial zeal or competence - stymies development in the former East Bloc and Third World countries. This seemed to be a shockingly original notion when the author first propounded it in his bestseller The Other Path, and it still does. If the book has a flaw, getAbstract.com warns, it is that the author’s undisguised missionary ardor sometimes makes one wonder whether he is merely a zealot. Even if he were one, the book would merit reading.

Hernando de Soto is President of the Institute for Liberty and Democracy (ILD) headquartered in Peru. Time recently named him one of the five leading Latin American innovators of the century. He was Personal Representative and Principal Advisor to the President of Peru and initiated economic reforms.

The Importance of Provable Ownership

Ownership and the institutions that support it are the key to the success of the capitalist West. As fundamental as it is, ownership is an artificial construct. When communism fell, millions of people in the countries of the old East Bloc had property rights that were nonexistent, unenforceable or recognizable only in their own neighborhoods. They lived without any verifiable recorded address, and couldn’t enforce debts or collateralize loans. This is not unusual; it is the state of affairs that prevails in much of the world.

What’s more, something like it once prevailed in the United States. At its inception, the U.S. did not have an unambiguous system of titles and ownership. Land titles overlapped and squatters planted empty land and believed that because they had improved it, they owned it.

The history of ownership in the United States has lessons for the developing world. Most of the developing world has seen a massive migration from the country to the cities, where many migrants squat in shantytowns. Their property rights and businesses are outside of the legal system. Complying with all of the regulations, restrictions...