Summary of The Post-Truth Business 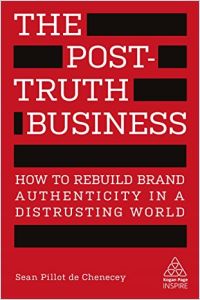 Brand expert Sean Pillot de Chenecey’s broad-ranging manifesto speaks to ethical issues of dishonest politics, data privacy, election interference, surveillance, authenticity in branding and the related implications of emerging technologies. His theme – the erosion of trust in society’s institutions and how to restore that trust – ties his treatise together. However, the author appears to combine previous essays in one book; certain chapters read like similar articles presented a little differently. Still, those interested in these crucial issues – and particularly those who are new to them – may benefit from the repetition of the book’s pivotal points, arguments and advice.

Though trust in leaders and institutions has plummeted, it remains as important as ever.

Trust in society’s leaders and institutions has fallen dramatically worldwide. In 1976, three-quarters of Americans professed faith in mass media. Today, only a third of the people in the United States have faith in what they hear, watch or read.

The strong desire for trust manifests in movements demanding greater transparency and in socially conscious consumerism. Though under attack, trust remains indispensable.

The internet and social media greatly extend the volume, speed and reach of propaganda, misinformation and lies.

The internet, social media and various deceptive technologies make lying faster, easier, harder to check, more widespread, more compelling and, with tools like augmented reality and digital editing, more convincing than ever. At the same time, other technologies are emerging to help protect privacy and authenticate data and transactions.

More than two-thirds of adults in the United States rely on internet outlets...