Summary of The Resilient Enterprise 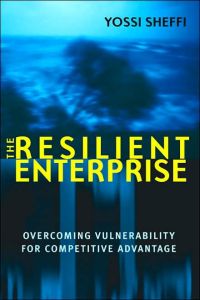 A fire burns down the manufacturing plant of your key supplier, who makes parts you absolutely must have. A contractor miles away accidentally cuts a communication cable, taking your entire information system offline. A labor strike shuts down ports, and your products sit offshore for weeks. All of these scenarios have damaged companies in the past. However, today, in the post-9/11 era, terrorism has elevated your risk to entirely new levels. Is your organization ready to cope? Yossi Sheffi, an international expert in supply chain management, shows you how to determine your company’s level of vulnerability, and what to do to become resilient in the face of setbacks. getAbstract recommends this book to executives who want to prepare for disaster.

Yossi Sheffi is a professor of engineering systems at the Massachusetts Institute of Technology and director of the MIT Center for Transportation and Logistics. An internationally recognized expert on supply chain management, he has worked with leading companies around the globe.

When a line of thunderstorms touched off a fire at a Philips computer-chip plant in Albuquerque, New Mexico, on March 17, 2000, it seemed like no big deal. When firefighters arrived, they learned that Philips personnel had already extinguished the blaze, and no one had been injured. That minor fire, however, touched off a supply chain disruption for major corporations around the globe. The reason: Fabrication rooms must be among the cleanest places on earth, and soot and water contamination effectively shut down Philips’s chip operation.

Nokia realized right away that the disrupted delivery would jeopardize the assembly of about four million cell phones. Thirty Nokia officials flew to Europe, Asia and the United States in search of a solution. Ultimately, they found factories in the Netherlands and Shanghai that could provide the chips they needed.

Ericsson, which also relied on the plant’s chips, reacted more slowly. Company executives took longer to understand the extent of the problem. By the time they realized how widespread the chip shortage was, Nokia had seized all the spare capacity. As a result, Ericsson experienced losses of between...