Summary of The Rules of Money 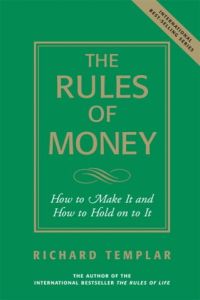 The staggering number of lottery tickets sold each year indicates that millions of people want to be wealthy but aren’t necessarily willing to put in the required effort. Unless your lotto numbers come up or your father is a billionaire who hands you big bucks, instant prosperity is a fantasy. The road to riches actually is paved with hard work, long hours and a bit of luck. Moreover, says Richard Templar, wealthy people follow a basic set of principles that many other people tend to ignore. Templar’s witty, informative and briskly written book outlines 100 catchy (and somewhat duplicative) rules as a framework for offering financial guidance. His advice may not get you a dinner invitation to Warren Buffett’s house, but getAbstract believes it will help you understand what the rich do differently and how you can apply their rules for making money.

Believe it or not, money is out there for the taking. It doesn’t matter if you’re young or old, black or white, rich or poor, if your parents are from a foreign country or if you grew up wearing tacky hand-me-downs to school. Hundreds of people who were raised in abject poverty managed to become millionaires because they were determined to succeed. They simply refused to let circumstances stand in their way. If you think of yourself as a working stiff who is destined to struggle through life groping from paycheck to paycheck, your self-fulfilling prophecy is likely to come true. Attitude is half the battle.

To start out in the right direction, decide how you define wealth and how you’re going to achieve it. Some people might consider themselves wealthy if they don’t have to worry about the bills and have enough money in the bank to survive a six-month emergency. Others might characterize wealth as having a million-dollar home on a pristine beach or a shiny sports car in the driveway.

You have to know where you’re going and be realistic about how to get there. If you want to make a fortune in the stock market, but don’t enjoy working with figures...