Review of The Slight Edge 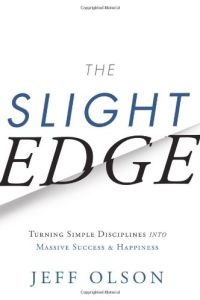 Personal development expert Jeff Olson focuses his bestselling manual on helping you recognize and develop your “slight edge” to build better habits. His approach may be familiar to readers who have dipped into other books on setting goals and changing your life. Olson refers to some of them and retells stories from others. Since part of his message is that you already know most of what you should do and you just need to do it, his reliance on reviewing known information isn’t that great a problem. Olson makes his message fresh and promising. He writes clearly, and presents his ideas and his explanations of how to manifest them in accessible prose. This expanded reissue of the original edition includes personal stories from readers of his earlier, briefer version. Hearing from those who found that his work made a significant, positive difference in their lives makes Olson more immediate and even more credible.

Jeff Olson, who has been guiding people on the road to personal development for decades, founded several successful marketing and sales organizations.

Olson asks you to imagine two men. One is a “beach bum” who enjoys weightlifting and the sun, but who barely squeaks out a living caddying for richer golfers. The other is a college graduate who starts his own successful business. They are both the same man, just at different stages of his life – and he will remain the same man when his business crashes, leaving him emotionally defeated and broke. Olson contends that people really don’t change. The same actions might lead one person to all three outcomes – beach bum, business owner, failure – and could shape what he does next.

Olson asserts that people often know what they need to do – the way most people know, in a general way, what it means to eat better versus eating poorly. And most people know that eating better results in improved health. What makes the difference, then, between success and failure? Olson’s answer is: the slight edge.

How Not to Manage People
8
The Beauty of Discomfort
8
Crushing It!
9
Start at the End
9
Convinced!
9
Ultimate Presentations
8