Summary of The Steve Jobs Way 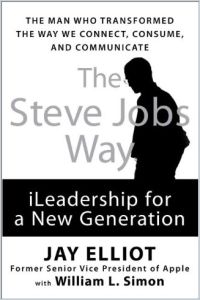 “We’re here to put a dent in the universe,” said Steve Jobs, co-founder of Apple Computer and then chairman and CEO of Apple Inc. Today, all personal computers incorporate a version of the mouse-driven graphical user interface that Jobs perfected and popularized. The guiding spirit behind the Macintosh computer, iPod, iPad, iPhone and iTunes, Jobs is an American corporate legend. Few people worked more closely with him than Jay Elliot, a former senior vice president at Apple. In this business biography, written before Jobs died, Elliot and co-author William L. Simon detail Jobs’s corporate achievements, his attention to product detail and his visionary leadership. getAbstract recommends their revealing profile to those compelled by or curious about the genius of Jobs.

Jay Elliot is a former senior vice president of Apple Computer. William L. Simon co-wrote The Art of Deception and Ghost in the Wires.

The Steve and Woz Show

In 1971, at age 16, technophile Steve Jobs met computer geek Steve Wozniak. Wozniak and his love of technology impressed Jobs, who sensed that he and “Woz” were soul mates. A few years later, they became partners in a technology start-up, the future Apple Computer Inc. (now Apple Inc.). They made a perfectly complementary team: Wozniak had no business savvy, but Jobs had plenty. When Wozniak built Apple’s first computer, he needed Intel’s expensive DRAM chips. Since Apple could not afford them, Jobs convinced Intel to send him the costly chips for free.

Wozniak loved to tinker with technology and build things. Jobs was a visionary leader who could imagine commercial and product possibilities that no one else could see. “When Steve believes in something, the power of that vision can literally sweep aside any objections, problems or whatever. They just cease to exist,” said Macintosh engineer Trip Hawkins.

Walk in the PARC

The Art of Deception
9