Summary of The Taiwan Temptation 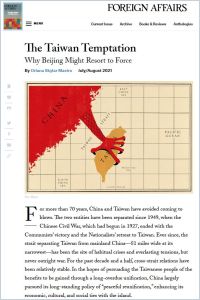 As policy expert Oriana Skylar Mastro adeptly outlines in this cogent article, the likelihood of a Chinese military incursion into Taiwan is growing. She notes how Chinese public opinion strongly favors reunification and that, as the Chinese economy has grown and increased the world’s dependence on it, few nations would be willing to scupper economic ties in favor of Taiwan. She also details how the United States can best handle the looming tensions. Students of geopolitics will find her conclusions compelling.

Oriana Skylar Mastro is a fellow at the Freeman Spogli Institute for International Studies at Stanford University and a senior nonresident fellow at the American Enterprise Institute.

The peaceful – if not always benevolent – coexistence between Taiwan and China appears to be unraveling.

Since their separation in 1949, China and Taiwan have avoided outright conflict but not waxing and waning tensions. China has long followed a gentle path toward reunification by focusing on its shared cultural connections with Taipei. The mainland has also used its economic cudgel to isolate the island, inducing Taiwan’s allies to cut ties with it in favor of China.

But China has now begun to rattle its saber more loudly. President Xi Jinping has grown more bellicose on the matter of the island’s sovereignty, and the Chinese military has stepped up its presence near Taiwan. Behind these gestures...

Is Taiwan the Next Hong Kong?
8
The Senkaku Paradox
6
Party Man
7
The New China Scare
8
There Will Not Be a New Cold War
8