Summary of The Two-Income Trap 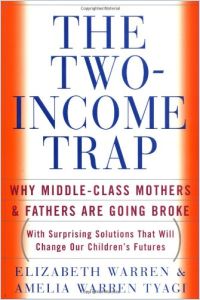 Mother-and-daughter authors Elizabeth Warren and Amelia Warren Tyagi tell the frightening tale of a rising tide of bankruptcies and financial difficulties in middle-class America. Their statistics show that families with children, including single parent families, are hardest hit by this epidemic. The authors, who make no pretence of objectivity, blame corporate greed and government neglect. Their politically improbable proposals include school vouchers removing geography as a placement criteria and the re-regulation of lending. The book doesn’t ever really define its pivotal audience, the "middle class." It trusts your conventional wisdom about what it means to be middle-class, while passionately questioning conventional wisdom about consumer debt. Yet, despite the book’s flaws, the authors make a thought-provoking, eye-opening argument about lending practices and they issue clear warnings about debt. getAbstract.com recommends this book to families, and to anyone concerned about social justice, family-friendly policies and consumer debt.

Elizabeth Warren, a professor at Harvard Law School, is the co-author of As We Forgive Our Debtors and The Fragile Middle Class. She is vice-president of the American Law Institute, and served as Chief Advisor to the National Bankruptcy Review Commission. Amelia Warren Tyagi was a McKinsey & Company consultant, specializing in health care, insurance and education. She co-founded HealthAllies, a healthcare company.

America's middle class is facing a hidden danger: bankruptcy. Today, more people file for bankruptcy than get divorced. While divorce, and its influence on children, is widely studied, few families discuss their finances or admit to the shame of bankruptcy. Yet, the effects of financial distress on children are as serious as the impact of divorce. Bankruptcy is very prevalent, but don't blame families for problems caused by corporations and government.

Contrary to popular belief, money problems are not limited to the poor. Millions of college-educated, hard-working, middle-class homeowners are closer than ever to financial collapse. The roots of this trouble go back to the 1970s, when women began to enter the workforce by the millions. A second paycheck promised to increase family stability and purchasing power, and to give women a safety net in case of divorce, which was also becoming more common.

Unfortunately, the rise of the two-income family accomplished neither goal. Today's two-income families earn far more money than their 1970 counterparts, but have less disposable spending power, because three-quarters of their income goes...