Summary of The Wal-Mart Effect 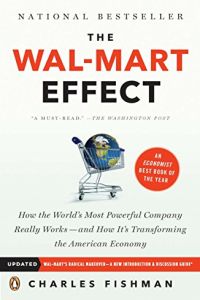 Most people are generally in favor of both a just society and low prices. So what are they to think about Wal-Mart Stores, Inc.? Is it the world’s most rapacious retailer or a great place for a bargain? Does it rule its suppliers, forcing them to run overseas sweatshops to compete or does it spur more economical products? Does it pay rock bottom wages and relentlessly pursue profits, sales, market dominance and cheap goods, or does it provide rare relief for the consumer? The accusations sound daunting, unless you are a budget-weary customer. For many shoppers, these are uncomfortable contrasts. And whatever you think of Wal-Mart, you can’t ignore it. With huge stores across the US and worldwide, Wal-Mart, according to Charles Fishman, is not just “the world’s most powerful company,” it is an “economic ecosystem.” Railing against it is like shaking your fist at a tsunami. Wal-Mart is nearly impervious to external impact, but Fishman has made it far more knowable. Given the debates it provokes, the impact of its policies and the price wars it wages, getAbstract welcomes this look behind Wal-Mart’s shelves.

Journalist Charles Fishman is senior editor of Fast Company. In 2005, he received the prestigious Gerald Loeb Award for business journalism. He often is a guest on CNN, NPR and Fox News.

A Company Unlike Any Other

In America, Wal-Mart is everywhere. Some 90% of US residents live within a 15-mile radius of a Wal-Mart store. Americans spend, on average, a whopping $35 million every hour of every day at these stores. Given the remarkable breadth of its operations, Wal-Mart is radically reshaping the retail business sector in the United States. It has a profound effect on consumer goods manufacturers – not only in the US, but globally. Wal-Mart can name virtually any terms it likes for thousands of suppliers worldwide and can crush companies that do not meet its parameters.

Since it is the largest employer in 37 US states, Wal-Mart’s policies on workers’ pay and benefits (untouched by unionization, which the company rigorously opposes) set the table for other employers. It has a similar effect on the wages of workers around the world. They toil for long hours and low pay under brutish conditions for product manufacturers that Wal-Mart squeezes, wringing every penny from their price.

Wal-Mart lives up to its promise to deliver the lowest everyday prices to its customers. A recent analysis indicates that Wal-Mart saved US consumers $30 billion in one...