Summary of Way of the Wolf: Straight Line Selling

Gallery Books, 2017
From WAY OF THE WOLF: Straight Line Selling: Master the Art of Persuasion, Influence, and Success by Jordan Belfort. Copyright © 2017 by JB Global, Inc. Reprinted by permission of Gallery Books, a Division of Simon & Schuster, Inc
ISBN: 9781501164286
Pages: 256 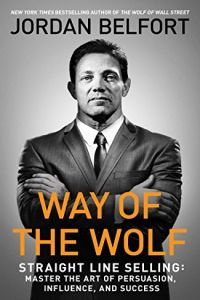 Author Jordan Belfort has experienced remarkable highs and disastrous lows in his life. Actor Leonardo DiCaprio portrayed him in the Martin Scorsese movie The Wolf of Wall Street. As a stockbroker with more than 1,000 people working for him, Belfort made millions of dollars and lived a lavish lifestyle. Yet he also engaged in securities fraud and money laundering, and he served 22 months in prison. Despite his notoriety, Belfort has a lot to teach salespeople about how to sell and plenty to share with nonsellers about how to persuade others. He spells everything out in this global bestseller. getAbstract recommends Belfort’s over-the-top, at times vulgar, but nevertheless expert and insightful selling advice to marketers and to those who just want to become more compelling, convincing and credible in their everyday lives.

Jordan Belfort is an innate salesperson. At any time or at any place, he can sell anything to any prospect. Belfort can teach you to become an expert salesperson. As portrayed in The Wolf of Wall Street, a 2013 movie, Belfort taught raw, young salespeople how to sell $5 stocks over the phone to America’s wealthiest, the top 1%.

As a result of Belfort’s guidance and his Straight Line System, the rookies on his team became master closers. Many became millionaires. In the system, the salesperson assumes control of the sale, maneuvering the prospect “from the open to the close along the shortest distance between any two points: a straight line.”

Straight Line salespeople don’t lose focus or waste time by conversing with prospects on subjects that have nothing to do with the sale. Everything they say and do when talking with potential buyers has a focused objective: Stay on the Straight Line and close the sale.

After his initial work with novice sellers, Belfort went on to teach his methods to experienced marketers and other persuaders worldwide and across many sectors, including in banking, real estate, automobiles...