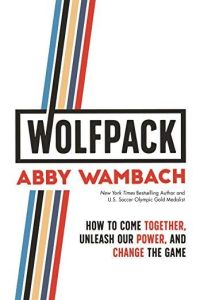 You are not Little Red Riding Hood. You are, in fact, the “Wolf.” Readers will totally relate to sports legend Abby Wambach as she describes how playing championship soccer unleashed her inner competitive Wolf. Her experience as co-captain of the US Women’s National Team – her “Wolfpack” – taught her lessons in leadership from the perspective of a team player, skills that traditional command-and-control leaders overlook and undervalue. She encourages women to bring their unique gifts and vulnerabilities to their leadership styles. Wambach shows women that they, too, can embrace their inner Wolf, compete at the highest levels and dare to lead from wherever they are.

Soccer champion Abby Wambach learned lessons about leadership as a team player – a member of the “Wolfpack.”

Former US Women’s National Soccer Team co-captain Abby Wambach remembers that when Barnard College asked her to deliver its commencement address she was worried she couldn’t measure up to previous speakers, including President Barack Obama and Meryl Streep. Wambach was a famous athlete who’d led her US team to the world championship. She held the world record for international goals scored by women and men. But she didn’t understand how her insights could help Barnard seniors. Then she realized that the most valuable lesson she had learned was how to be a team player.

Wambach explains what she most loved about soccer. She helped create a culture on the US team that went beyond excellence, a mind-set in which team players connected deeply as a tribe. Their camaraderie, she writes, made them better soccer players and better people. Following her retirement from soccer, Wambach wondered if she could fashion a bigger team of “All Women Everywhere.” “I created a team culture based on more than just excellence,” Wamback writes. “We not only won, we won with joy, honor, connectedness, commitment and sisterhood.”