Summary of Work Is Love Made Visible 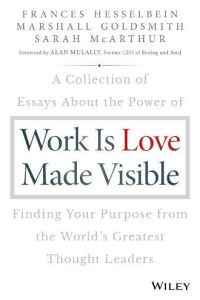 This book​​​​​​’s origin stems from a question that editor Frances Hesselbein asked her colleague Sarah McArthur, “What is it you see when you look out the window that is visible but not yet seen?” The book’s three editors – including well-known management author, Marshall Goldsmith – suggest that it’s time to think about how you see the world and how would you like it to be. They asked 30 distinguished thinkers to answer this question and to discuss their vision of the world, and how it shapes their identity and their work. Each contributing essayist offers a personal answer. Their answers – and perhaps yours – seem to have a lot to do with recognizing your purpose in life.

Frances Hesselbein is the former CEO of Girl Scouts of the USA and the chair of the University of Pittsburgh’s Frances Hesselbein Leadership Forum. Marshall Goldsmith, PhD, an authority on executive leadership, has written several management books, including Triggers and What Got You Here Won’t Get You There. Writer, editor and writing coach Sarah McArthur manages daily operations at Marshall Goldsmith Inc.

Leaders should focus on who they are, not just on what they do.

Distinguished leaders – including a former US Marine general, a former US Army general, a former Doctors Without Borders professional and a former top-ranked teenage tennis player – present their individual visions of the world, and explain how those visions shape who they are, what they do and what contributions they make to a better world. They agree that lofty titles and positions of authority don’t turn people into leaders. People become great leaders based on their character, vision, values and dedication to an elevated mission.

Business sage Peter Drucker (1909–2005) believed that leaders should be mentors and should outline their values and principles in their own words.

Leadership coach Marshall Goldsmith believes that today’s leadership has evolved based on seven trends: 1) Business is more global than local; 2) diversity is replacing uniformity; 3) leaders must stay abreast of technology; 4) leaders must be constant learners; 5) leaders must engage in constructive dialogue with those they lead; 6) teams and alliances...

What Got You Here Won't Get You There
9

Leading For Innovation And Organizing For Results
8

The Organization of the Future
7