Summary of You’re It 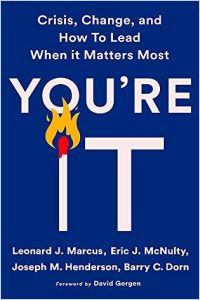 The faculty of the National Preparedness Leadership Initiative at Harvard University interviewed the leaders who responded to the 2013 Boston Marathon bombings, gleaning lessons about meta-leadership in a real-world context. They found that meta-leaders in Boston used “swarm intelligence“ to collaborate and mitigate harm. Leonard J. Marcus, Eric J. McNulty, Joseph M. Henderson and Barry C. Dorn draw on these findings to help leaders harness their analytic capabilities and unite diverse people to work together toward a shared vision, especially amid a crisis. The authors’ insights include how to deal with stress and how to reach a nuanced understanding of complex systems.

Leonard J. Marcus is the founding co-director of the National Preparedness Leadership Initiative, (NPLI), a joint program of the Harvard T.H. Chan School of Public Health and the Center for Public Leadership at the Harvard Kennedy School of Government. Eric J. McNulty is associate director, Joseph M. Henderson is a senior fellow, and Barry C. Dorn is a senior advisor at the NPLI

Meta-leaders align people around a shared mission and purpose. They understand systems, complexity and adaptive capacity.

In the hours after the Boston Marathon bombings in 2013, a strong response from community members, leaders, care providers and medical personnel helped reduce the impact of the attack. People reacting to the bombings offered successful examples of real-world meta-leadership. Their crisis responses ensured the survival of 264 injured people, though the explosions killed three spectators.

Many of these leaders had attended the National Preparedness Leadership Initiative at Harvard University (NPLI), an executive crisis leadership program, and others had attended its researchers’ meta-leadership seminars. Even though no one acted as an operational leader overseeing the entire bombing response, leaders each reacted effectively by employing “swarm leadership.” Each individual relied on the same consistent set of social cues and behaviors when making decisions and taking action. “Meta” denotes “transforming, above, beyond and at another level” – and these...